Kripal is my new cooperator, I am very satisfied for her service

I think it should our good cooperator, higher quality and better service.

I am so lucky to know such great company as KRIPAL!

It is a good company and person, surely nice products, I like them.

Over passed 6 years, they are always helpful, APPRECIATED.

AC motor starters has a contactor and an overload relay, which will open the control voltage to the starter coil if it detects an overload on a motor. Overload relays may rely on heat produced by the motor current to operate a bimetal contact or release a contact held closed by a low-melting-point alloy.

The overload relay opens a set of contacts that are wired in series with the supply to the contactor feeding the motor. The characteristics of the heaters can be matched to the motor so that the motor is protected against overload. Recently, microprocessor-controlled motor digital protective relays offer more comprehensive protection of motors.

When the motor is not running, although line voltage is available, no current is drawn by the starter or motor.

When the "start" button is pressed, the motor is not powered directly, rather the electromagnet in the contactor is energized. The magnetic switch in the contactor then engages, simultaneously switching current to the motor and providing self-sustaining current to maintain its own state. Thus when the start button is released, the magnetic switch remains engaged and the motor remains running.

Pressing the "stop" button breaks the circuit to the contactor which consequently de-energizes its electromagnet thus cutting current to the motor.

AC motor starters are commonly found on equipment drawing several horsepower or higher. Examples include woodworking machinery such as cabinet saws or shapers. Machines with smaller loads, such as a drill press or most handheld tools normally use only a switch instead. Magnetic starters are stock components for many machines, and aftermarket starters are also available for use as replacements or for retrofitting older machines. 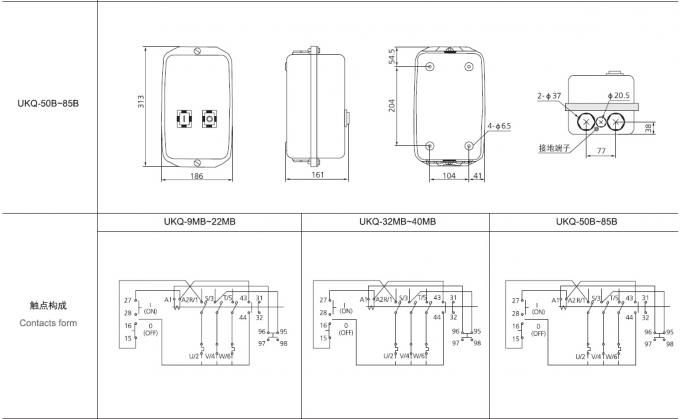 Auxiliary: 1NO or 1NC